In the early 21st century, a wide range of forms of political violence share the centre stage with traditional warfare. The international community cannot tackle them successfully without adopting a holistic approach that uncovers common patterns and pathways to violence, and without addressing the structural and political conditions that make violence possible, including weak institutions, gender inequality, and state repression.

A seemingly bewildering array of forms of violence confronts us in the early 21st century. Large-scale gang warfare in Central America, Western military interventions in Afghanistan and Iraq, hybrid warfare in eastern Ukraine, terrorist attacks in Europe, civil war in Syria, or armed militias in the eastern Democratic Republic of the Congo – all seem to portray a world of ever-greater danger. Yet just how violent are contemporary global politics, and how – if at all – have armed conflict and political violence changed since the end of the Cold War? Three facts will help us answer the first question; the second is more complex.

To begin: most lethal violence does not occur in conflict zones, most of the states worst affected by violence are not at war, and levels of deadly violence in several non-conflict settings are higher than in contemporary war zones. According to the Global Violent Deaths 2017 report (produced by the Small Arms Survey at the Graduate Institute), 560,000 people died violently in 2016, but only about 100,000 (18%) were killed in war zones. Only 9 of the 23 most violent countries were affected by armed conflict, and El Salvador, Venezuela, and Honduras all had violent death rates greater than in most war zones (excepting Syria and Iraq).

The majority of deaths – more than 400,000 – thus occurred in non-war contexts, and a significant proportion of them (around 5%) at the hands of the state or its agents. And much of this violence – but we do not know how much – is organised, non-random, and in some sense political. Even if this picture of the number of war-related violence is misleadingly low (because it omits the indirect but still lethal burden of war), it shows that war is only one piece of a much larger puzzle of contemporary armed violence.

The limit of the study of violence

Compared to the 20th century, war and formal armed conflict occupy a small place in the spectrum of violence. Somewhere between 60 and 80 million people died in wars in the 20th century; another 100 million or so (and estimates vary widely) as a result of what we could call “state violence” – including genocides, mass killings, forced starvation and other state acts with lethal consequences for populations. Notwithstanding the tragic violence in Syria, Iraq and elsewhere, war death is not how most people die violently.

These rough facts and figures go some way to explaining why other forms of violence share the centre stage with warfare. But how then should we try to understand these diverse forms of violence? Three traditional limitations to the study of violence need first to be overcome.Most lethal violence does not occur in conflict zones, most of the states worst affected by violence are not at war

The first limitation is the compartmentalisation of violence studies: interstate and civil war and organised armed actors are covered by international relations, gangs by sociology or anthropology, organised crime by criminology, and sexual and gender-based violence by gender studies. Yet aside from obscuring the big picture, compartmentalisation hinders our understanding of the way seemingly different forms of violence may be linked through complex processes that escalate and exacerbate conflicts, and that may have broader impacts on human security, political and social life, state fragility, and regional order. Sexual violence in (and after) conflicts, for example, is connected to broader conflict dynamics, and a focus on sexual violence can hinder our understanding of how sexual violence is related to other forms of violence. This relationship is not one-way, with war causing higher levels of sexual and gender-based violence. There are deeper processes at work, as states with lower levels of gender equality and higher levels of gender-based violence are more likely to be involved in interstate conflicts or to initiate the use of force, and are less likely to comply with international norms. Likewise, the rituals, organisational forms, and modes of action of some South American gangs would resonate with those of West African warlords, for instance.

The second limitation is to draw a sharp distinction between political and non-political (criminal, interpersonal, economically motivated) violence. This narrowly criminological or legalistic perspective, which labels all non-conflict deaths as “homicides”, is misleading. Homicide conjures up a form of interpersonal violence that is individual, unorganised, relatively random, and essentially apolitical (and very rare in advanced industrialised states). This is an inadequate way to think about the more than 50,000 violent deaths in cartel-related gang warfare in Mexico, or land-rights disputes in Yemen that claimed several thousand lives a year (and that have now escalated into full-scale war).

This question "What makes violence political?" has no simple and unambiguous answer. Most scholarship assumes that political violence can be identified and categorised by focusing on the degree and scale of organisation of the violent actors, the meaning and motivations or purpose of the acts, or the nature of the act itself. None of these criteria by themselves are sufficient, however, without clarifying what we mean by “violence” and “political”. From a holistic perspective, defining political violence as violence used for explicitly stated political ends, or violence that undermines and challenges the state’s legal monopoly over the legitimate use of force, or violence that implicates the state and its repressive apparatus, may be essential for gaining insight into the causes and consequences of, and framing appropriate responses to, war and political violence in the 21st century.

The third limitation that must be overcome is an undue focus on a purely somatic understanding of violence as the intentional use of physical force to cause harm – on counting the dead and the injured. Moving beyond a somatic understanding of violence to include psychological violence, violence by deprivation, neglect or omission, and such things as systemic, structural or symbolic violence is crucial to understanding how violent acts – such as the repression and harassment by state officials of street vendor Mohamed Bouazizi in a small city outside Tunis in December 2010 – can escalate and spread to large-scale political uprisings and even civil war or transnational terrorism.

Violence prevention and reduction is at the heart of the Sustainable Development Goals, and in particular Goal 16, “Promote just, peaceful and inclusive societies”. If the international community is to successfully tackle conflict and political violence in the 21st century, however, it will have to go beyond categories such as war, terrorism, gang violence, and homicide to address the wide range of sources, causes, and consequences of violence. Many of these causes, such as weak institutions, gender inequality, governance failure or state corruption, are intensely political, have national and international implications, are interlinked, and demand a holistic approach to understanding and action. 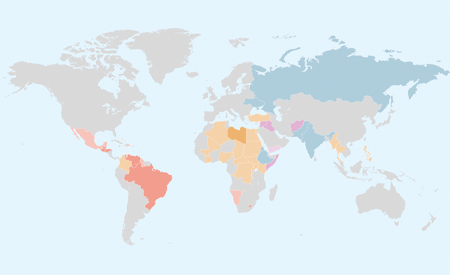 Map based on the data produced by the Small Arm Survey, and enriched by the Graduate Institute's Research Office in Geneva, in collaboration with whybe.ch.

Terminology Related to Violence and Conflict

The intentional use of physical force or power, threatened or actual, against oneself, another person, or against a group or community, that either results in or has a high likelihood of resulting in injury, death, psychological harm, maldevelopment, or deprivation.
The World Health Organization (WHO)

Derived from the Latin word conflictus, which means collision or clash. This term is understood as a disagreement between two or more parties through which the parties involved perceive a threat to their needs, interests or concerns. Source

A dispute involving the use of armed force between two or more parties, often referred to as war. Source

A conflict between a government and one or several non-governmental parties, often with interference or support from foreign actors.

The intentional use of illegitimate force (actual or threatened) with arms or explosives, against a person, group, community, or state that undermines people-centred security and/or sustainable development. Source

Violence that is directed against a person on the basis of gender or sex. It includes acts that inflict physical, mental, or sexual harm or suffering, threats of such acts, coercion, or other deprivations of liberty. While women, men, boys and girls can be victims of gender-based violence, because of their subordinate status, women and girls are the primary victims. Source

Armed conflicts according to international law/IHL

IHL distinguishes between Non-international armed conflict defined as "A conflict in which government forces are fighting with armed insurgents, or armed groups are fighting amongst themselves" and International armed conflict defined as "A war involving two or more States, regardless of whether a declaration of war has been made or whether the parties recognize that there is a state of war. Source

A criminal act or acts intended to inflict dramatic and deadly injury on civilians and to create an atmosphere of fear, generally in furtherance of a political or ideological (whether secular or religious) purpose.  Terrorism is most often carried out by sub-national or transnational groups, but it has also been known to be practiced by rulers as an instrument of control. Source

To Top
Previous
Introduction
Next
Article 2