Multilateralism Is in Crisis – Or Is It?

After decades of globalisation and integration, the world seems to be fragmenting again, epitomised best, perhaps, by the return of geopolitics, protectionism, unilateral sanctions, treaty withdrawals, and even military and economic coercion. Challenged by the United States, the return of old (Russia) and the growing assertion of new (China) antiliberal powers, the multilateral system is shaken both in its normative foundations and its operational capacity.

Designed to foster cooperation among states, the multilateral system put in place after WWII is based on shared “principles of conduct”, “indivisibility” and expectations of “diffuse reciprocity” (J. Ruggie). Consisting in a series of overlapping frameworks, the multilateral architecture quickly grew to encompass economic development, international security, global health, human rights, and environmental issues. It found expression in multiple forums such as the UN, World Bank, IMF, WTO, NATO, OECD, as well as more informal venues such the G7 or G20. A long and imperfect work in progress, multilateralism evolved in parallel to, and was a key component of, the emerging liberal international order rooted in normative assumptions of progress.

A child of the 20th century

For much of the second half of the 20th and the early 21st century the US acted as a benevolent hegemon championing the multilateral system and Western universalism through soft power and military intervention. The multilateral system, however, remained a hybrid affair, combining universal aspirations such as human rights with a more prosaic system of managed competition in which major powers — including non-democratic and authoritarian ones — exert a prepondering influence, for instance at the Security Council. Far from being flawless, it counts a number of endemic structural impairments, among which the veto system debilitating the Security Council, the presence of human rights abusers at the Human Rights Council, the chronic lack of financing, and inefficient decision-making processes.

With the end of the Cold War, the multilateral system gained a new momentum as global exchanges accelerated and more inclusive, multistakeholder approaches allowed for the participation of new actors, including civil society organisations and private businesses. This is also when the notion of “global governance” was first coined and started to gain traction, as reflected in mechanisms such as the Commission on Global Governance created in 1992.

More recently, however, it seems that multilateralism has become more akin to a faltering hot air balloon, as it has entered a state of crisis or decline. The postcolonial backlash against the predominance of the West and the rising tide of populism have been profoundly eroding the liberal values underpinning the multilateral system. While previously major powers were at least paying lip service to the multilateral agenda, some leaders, like US President Donald Trump, are openly disavowing or contesting it.

Pursuing an aggressive “America first” policy, the Trump administration has relinquished the traditional role of the US as herald of the international liberal order and withdrawn from the Paris climate convention, the Iran nuclear deal, and the Trans-Pacific Partnership. China, aiming to bend the multilateral system in its favour, is setting up parallel governance structures such as the Shanghai Cooperation Organisation or the China Development Bank. The EU, a traditional champion of multilateralism, is internally divided and losing influence on the international scene. The G8 has shrunk to the G7, and a trade war is looming between the US and China.

Concurrently, the UN and its manifold agencies have been losing their lustre, criticised for their lack of efficiency, institutional sclerosis and ideological infighting. The WTO has failed to conclude the negotiations of the Doha Agenda started in 2001, as bilateralism and protectionism are resurging worldwide, and its dispute settlement system has stalled. The complex architecture of arms control set up at the end of the Cold War is threatened by the dismantling of the Iran nuclear deal. Multilateral efforts to address climate change have made symbolic progress at best. The governance of the internet is forfeiting its initial aspiration of a borderless knowledge society as a few private companies are hoarding data exponentially and authoritarian states are misusing it as a tool of surveillance and repression.

The stakes are high as the crisis of the liberal international order comes at a time when multilateralism and concerted global action seem more necessary than ever. Pressing global issues such as major conflicts, climate change, migration flows, global economic shocks, arms control, and cybersecurity may indeed only be solved collectively. As the current COVID crisis is illustrating, while existing multilateral mechanisms such as the WHO have excruciatingly shown their limits and shortcomings, alternative routes of unilateralism and uncoordinated action at the state levels have proven dead ends in containing the spread of the virus and are unlikely to address the global repercussions of the pandemic. More effective and better endowed mechanisms of global governance are needed to anticipate, prevent and manage future outbreaks and mitigate their devastating consequences not just epidemiologically but also on the social and economic level.

The changing nature of multilateralism

There is, however, a different, more optimistic story than the bleak picture of multilateralism in crisis. It has been argued that far from being on the verge of collapse, the multilateral system was merely undergoing a profound mutation – one that might even end up making it more effective and better adapted to the realities of the 21st century. Global governance has indeed in many ways gained in complexity, buoyancy and density. It now consists of a multilayered system of – often competing, overlapping or conflicting – regimes, agreements, networks, and initiatives. No longer the sole prerogative of states, it is driven by a bemusing multitude of actors (IOs, corporations, civil society organisations, advocacy groups, etc.) — with often widely asymmetric means — that express themselves in a host of venues, forums, summits and platforms and produce a plethora of standards, norms, regulations, and public–private partnership (PPPs).

Multilateralism today is characterised by capillarity and variable geometry, a high degree of informality, and increased participation and inclusiveness. Elements of “smart” governance – to which the increased participation of multinationals and experts may not be extraneous – are allowing for more flexible, targeted and responsive multistakeholder initiatives. Such a pragmatic approach to global governance is reflected in a sort of market of norms and standards in which declarations of intent, ad hoc solutions and voluntary participation are privileged over formal binding agreements.

What we may thus be witnessing is not so much the demise of global governance per se but rather the decline of one particular type of multilateralism, epitomised by Western liberal hegemony and the concomitant intergovernmental agreements and institutions set up after WWII. As state actors are proving ever more reluctant to fund international organisations and engage into binding agreements, they are also forfeiting the more far-flung universalistic aspirations of the international liberal order and the win-win dynamic inherent to international cooperation. An alternative multilateral order may thus well be in the making, which would see the West and its commitment to liberal democracy increasingly marginalised.

The danger, ultimately, is that without a shared normative ground for collaboration and collective action going beyond mere pragmatic alliances, global governance risks relapsing into a neo-Hobbesian state of nature characterised by a dangerous cocktail of confrontational politics, zero-sum games, and neoliberal concentration of power in the hands of a few. Such a scenario would eventually forfeit the interests of smaller and medium-sized powers as well as civil society at large.

The present Dossier therefore aims to take stock of the current state of the multilateral system and its future prospects. It explores both the potential for reforms and the emergence of alternatives as the global geopolitical order is undergoing fundamental shifts and liberal universalism is losing traction. It aspires to get a better grasp of the new trends, tools and forums that are reshaping multilateral practice on a daily basis. 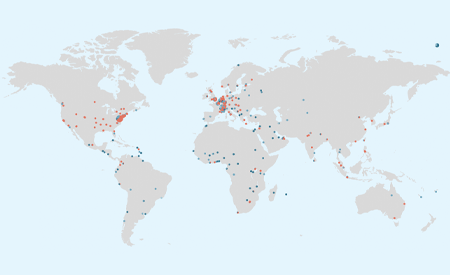 Map based on the data from The Correlates of War Project, “Intergovernmental Organizations (v3)” (for FIGOs) and from Olivier Westerwinter, “Transnational Public-Private Governance Initiatives in World Politics: Introducing a New Dataset” and its electronic supplementary material, in The Review of International Organizations, 2019 (for TGIs).
The data was enriched by the Graduate Institute's Research Office in Geneva, in collaboration with whybe.ch.

TIMELINE | The construction of multilateralism

VIDEO | Nico Krisch on the hierarchy of norms

VIDEO | Stephanie Hofmann and Erna Burai on the evolution of multilateralism

To Top
Next
Article 1
We use cookies to ensure that we give you the best experience on our website. If you continue to use this site we will assume that you are happy with it.Ok