Has globalisation reached its apex after centuries of expansion? Are we currently entering a phase of de-growth or de-globalisation? The present contribution argues the contrary by adopting a long term perspective and reviewing the profound transformations globalisation is currently undergoing in the wake of the digital revolution.

Globalisation is an old wooden ship, perhaps a frigate, that has been with us since the first trading systems in the Indian Ocean, the Silk Road, and the Age of Chinese and European explorations. Until 1800, global figures for international trade remained relatively low and eventually plateaued. This changed dramatically with a first wave of exponential densification of global flows in the era of high imperialism – which saw steam and steel diminishing transaction costs (steamship; railroad) and augmenting European firepower (gunboat; machine gun).

The second wave of globalisation in the wake of World War II (1945-1970) was based mostly on intra-industry trade (i.e. the exchange of broadly similar goods and services) and driven by spectacular improvements to productivity (mass production), transportation (aviation, merchant marine) and communication (telephone, satellites).

A third wave of globalisation, from the mid-eighties onwards, was fueled by the opening of economies after the end of the Cold War, the dramatic rise of multinational corporations, and the unbundling of production through the proliferation of global value chains and offshoring. In the early 2000s, globalisation had reached unprecedented levels with one third of all goods being traded internationally and more than one-third of financial investments being cross border.

However, since the financial crisis of 2007 globalisation seems to be in jeopardy. In a context of geo-political and economic uncertainty multilateralism is on the retreat as isolationism, protectionism and bilateralism gain traction. Realpolitik is in fashion as demagogues worldwide are flexing their muscles. Trump’s America First policy has led the United States to withdraw from the Trans-Pacific Partnership and call into question NAFTA.

An increasingly conflictual and multipolar global economy foreshadows a fragmented yet connected world. Financial investments have levelled after the seism of 2007, climate issues and depleting resources cast a dark shadow on global growth, and trade has been slowing. The WTO is in crisis with the Doha Round stalling and the free trade consensus eroding. Recent data suggests that global GDP growth has halved from 6% in the 1960s to 3% in 2015 and that trade intensity (the trade-GDP ratio), perhaps the most reliable measure of globalization, has been stagnating.

Even pundits of the WEF now concede, from the tips of their lips, that globalisation entails losers and inequality. The crisis of 2007 has unleashed a hefty popular backlash and antiglobalisation critics – once a voiceful minority – have now become mainstream. Commentators have thus been conjecturing that globalisation has reached its apex, was coming to a halt, or was ushering into the reverse path of “deglobalisation”. However, they may prove wrong.An increasingly conflictual and multipolar global economy foreshadows a fragmented yet connected world

Second, each time globalisation was on the ropes it managed to return stronger, boosted by the emergence of new technologies such as mass manufacturing or new communication devices.

Third, despite new tariffs, walls and populist rhetoric, globalisation continues to be driven by a myriad of technological innovations such as the generalisation of the optic fiber or liquid natural gas; geo-biological alterations such as climate change generating new trading routes in the Arctic or refugee flows in the South; manmade investments such as financial remittances and new megaprojects such as the Chinese Road Belt or the Panama Canal extension.

Fourth, the continuous growth of the middle class in emerging countries is spurring global demand as, in a process of great convergence, geo-economics sees trade's gravity relocating to Asia. South-South trade has also been soaring to become the fastest segment of world trade with developing economies now accounting for 24% of total goods trade in 2014 global flows.

Hence calling the death knell of globalisation seems precipitate. The number of international travellers annually rose from 659 million in 2002 to over a billion in 2013, cross-border used bandwidth has increased 45-fold since 2005 and the number of internet users now exceeds 3 billion.

THe digital revolution and Globalisation 4.0

Globalisation as we know it is undergoing a profound mutation. Driven by the digital revolution, artificial intelligence and the ubiquitousness of ITC, Globalisation 4.0 is comprehensively reshaping the composition and direction of transnational flows. Digital technology is reducing costs of production, access to, and distribution of goods and services. Tools such as 3D printing, translation software or file sharing allow for remote work and the outsourcing of activities such as medical analysis, programming, or designing. Advanced robotics and digital factory management make production chains more agile and easier to control. New digital ecosystems, microwork and microsupply chains allow individuals and smaller firms to access the global market.

Together with declining wage differentials this will lead to a major reshuffling of cards and radically new ways of tying the global with the local. Firms in advanced economies are starting to "reshore" parts of their manufacturing closer to their costumers, reducing, by the same token, risks related to long-distance trading and remote production sites.

The digital revolution will boost trade in global services such as microfinance- and assurance, tourism, information technology, entertainment and consulting, with powerful repercussions for workers in more advanced economies. Finally, the spectacular success of digital retail platforms such as Alibaba, Amazon or Airbnb allows a host of small businesses and producers to sell their products globally – e-commerce now accounts for 12% of global trade in goods.

Globalisation 4.0 is not without raising its own set of issues. Will advanced economies, who are driving the digital revolution and controlling most of the data flows, benefit more than proportionally? Will China, the biggest winner of the previous phase of globalisation, take on leadership and will it prove sustainable? Will new regional asymmetries, nodes and centers appear and will global inequalities continue to rise? How will the tension between increased political fragmentation and continued technological convergence ultimately play out? What is the likely impact of digitalisation on the redistribution of power between states, non-state actors and multinationals? How will the multilateral framework adapt as digital flows remain largely unregulated?

The precise contours of Globalisation 4.0 have yet to be defined, for we are in its early stages and a lot remains, literally, shrouded in the cloud. To better understand this turn in the global economy and answer some of the questions outlined above the present dossier reviews six major global flows (commodities and services, energy, data, people, ideas, and viruses) by contextualizing them in the longue durée and offering outlooks on future trends. Globalisation is now a next generation container ship with digital equipment and it is bound to stay with us for the foreseeable future. 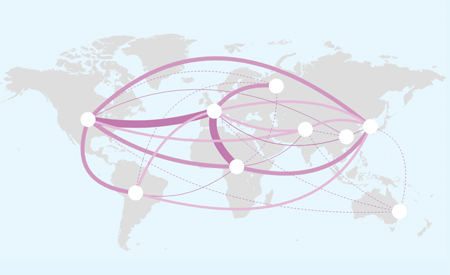 Timeline: The history of globalisation

Read more...
To Top
Next
Article 1