Food Security and Land Use in the 21st Century: The Return of Malthus?

The coming century raises many important problems regarding population, food requirements and land use. In many ways, the issue at hand reminds us of Malthus’s bleak predictions regarding the interlinkages between population growth and resource constraints. Nevertheless, the problems of the coming century are likely to be very different from those that the Reverend Malthus foresaw.

This piece will lay out the core of the problems human society will face – in the context of a century in which population pressures continue to mount and land constraints become ever more severe.

Population Pressures in the 21st Century

The 21st century will see a phenomenal amount of change in the global population. First, we are witnessing the continuation of a long-term process of human population growth, which commenced in earnest around 250 years ago (about the time of Malthus) and escalated thereafter, continuing to this day. A global population that was only about 1 billion individuals in 1750 escalated to about 2 billion individuals in 1950, and has since increased to approximately 7 billion. More importantly, the global population is expected to increase to about 11 billion individuals by the year 2100. This projection is based on the inherent momentum built into a population of the current size and demographic structure (i.e. age distribution). This would indeed amount to nearly the doubling of the human population over the course of the 21st century (from 6 to 11 billion).

The earth has never before experienced population pressures of this nature. The amount of land in use for agricultural production reached about 1.3 billion hectares in 1960, and has since expanded to nearer 1.6 billion hectares. Most analysts have suggested that the limit to arable land available is about 2 billion hectares, or a further 25% increase in land availability.

Of course, placing all of the globally available arable land in service to agricultural production would not prove desirable. There are many other land uses that are required to sustain the planet and speak against further expansion of the total acreage devoted to agriculture. Biodiversity preservation is dependent upon land use allocations, as habitat conversion is one of the primary drivers of species loss. Also, carbon sequestration depends upon the retention of existing forests, and the expansion of these. In the coming century, with the onset of multiple global problems such as climate change in addition to food security, meeting food requirements from reduced land allocations proves crucial.

This table demonstrates the extent to which land has been allocated to agricultural production in recent years, and where these allocations have occurred. In line with population changes, the primary locations for further land use allocations are situated in developing countries, with sub-Saharan Africa being the main source of new agricultural lands. Conversely, in developed countries, the rate of growth of agricultural land use has already turned negative. This imbalance between developed and developing countries is an important reason to look deeper for the source of the future food security problems.

Agricultural Production, Research and Development, and Land Use

The fact that the developed world has had less reason to use land has been partly due to a slowing of population growth in that region. The most important contribution to this trend, however, has been the impact of research and development (R&D) in the agricultural sector. Agricultural R&D has been the primary contributor to the growth in yields on the production frontier over the past half-century. This has been true to the extent that land use has gone into decline in many developed countries while overall production has multiplied.Vast amounts of global land may be released from agricultural production, with relatively minor consequences for overall food production.

In order to ascertain the extent to which this phenomenon (if replicated worldwide) is able to address the issue of food security, I, along with Ozgun Haznedar, Bruno Lanz and Pedro Naso, have estimated the global agricultural production function for the period 1960–2010, and then extrapolated from it to the globe for the remainder of this century. Our results are striking in that they indicate that vast amounts of global land may be released from agricultural production, with relatively minor consequences for overall food production.

This table demonstrates the relatively minor welfare losses that come from placing constraints on land use in agriculture (i.e., releasing land for other uses such as biodiversity and climate change). In essence, this shows that land is no longer the resource constraint that it once represented and that it is feasible to substitute R&D for land use to a large extent. 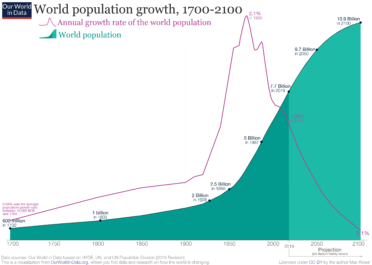 And herein lies the problem of food security in the 21st century. It is the combination of high population levels and low growth rates that will effectively “invert” the population pyramid in coming decades, resulting in vastly increasing dependency rates in the global population. A “dependency rate” refers to the percentage of the population that is economically inactive while remaining nutritionally active. For the past half-century, this rate has remained remarkably stable at about 7% of the population (defined as those neither in the labour force nor in training). In the coming century, the dependency rate is expected to approach 30% on a global basis, and a much higher rate in individual countries of the developed world (see info box).

An inverted population pyramid implies a very large older population, unlikely to contribute to the R&D sector and reliant upon a reduced labour force. This means that the source of the solutions to the food security problems of previous decades is now significantly handicapped by the switch in the relative sizes of the labour force and its dependents. The dependency factor has increased by about four times on each unit of labour – which that reduced labour pool must now feed as well. So, the Malthusian dilemmas of the 18th century (and 19th and 20th) were successfully evaded by means of the application of younger pools of talent to this particular form of problem solving. The Malthusian dilemma of the 21st century is different because we are facing constraints of both natural and human capital, in the context of increasing food requirements.

Where to Turn? The Need to Develop the Resources of the Developing World

Is there a solution to this problem of increasingly constrained resources (human and natural) in the context of increasing global populations? If there is, it lies in the immediate investment of global funds into the human capital of developing nations. It is only in these regions of the world that both resources will continue to increase – with both populations and arable lands increasing in certain parts, principally sub-Saharan Africa. The solution to the problems of the 21st century probably lies in replicating the experience of the developed world in the developing. If the developed world has been successful at substituting human capital (and resulting R&D) for natural capital in the recent past, then this is likely to be possible in the developing as well.The human capital in developing regions needs to be a crucial part of the solution to the food security problems of the 21st century.

This is of course a very partial list of potential solutions, but at their core lies the need to integrate the resources of developing and developed parts of the world. The human capital in developing regions needs to be a crucial part of the solution to the food security problems of the 21st century.

Welfare losses due to constraints on land use in agriculture

Welfare losses due to constraints on land use in agriculture

Total arable land in use: data and projections

Total arable land in use: data and projections

Like many common words, the word soil has several meanings. In its traditional meaning, soil is the natural medium for the growth of plants. Soil has also been defined as a natural body consisting of layers (soil horizons) that are composed of weathered mineral materials, organic material, air and water. Soil is the end product of the combined influence of climate, topography and organisms (flora, fauna and human) on parent materials (original rocks and minerals) over time. As a result, soil differs from its parent material in texture, structure, consistency, color, chemical, biological and physical characteristics. Soil is an essential component of land and eco-systems, which both are broader concepts encompassing vegetation, water and climate in the case of land, and in addition to those three aspects, also social and economic considerations in the case of ecosystems.

The word soil is also known as dirt, waste or earth.

Soil erosion is a common term that is often confused with soil degradation as a whole, but in fact refers only to absolute soil losses in terms of topsoil and nutrients. This is indeed the most visible effect of soil degradation, but it does not cover all of its aspects. Soil erosion is a natural process in mountainous areas, but is often made much worse by poor management practices.

Desertification is another common term used for (a) land degradation in dryland areas and/or (b) the irreversible change of the land to such a state it can no longer be recovered for its original use.

Mitigation is intervention intended to reduce ongoing degradation. This comes in at a stage when degradation has already begun. The main aim is to halt further degradation and to start improving resources and their functions. Mitigation impacts tend to be noticeable in the short-to-medium term: this then provides a strong incentive for further efforts. The word mitigation is also sometimes used to describe the reductions of impacts of degradation.

Rehabilitation is required when the land is already degraded to such an extent that the original use is no longer possible and the land has become practically unproductive. Longer-term and often more costly investments are needed to show any impact.

The term grabbing was adopted because of the lack of transparency in the set-up of land deals, their dubious legitimacy vis-à-vis communities who until then used these areas, and the dispossession the latter suffered once the deals were implemented. Estimates vary from 20 to 45 million hectares transacted between 2005 and 2010; the most recent estimates are around 30 million hectares in 78 countries. Actually, the calculation of grabbed areas has proven extremely challenging. Information is rarely disclosed given the controversial nature and the lack of legitimacy of those deals. Moreover, land grabs include not only transnational large-scale ones but also a broad range of national and local medium- and small-size land acquisitions that are hard to quantify.

To Top
Previous
Article 1
Next
Article 3